Stage 1: Project Description: In my math 2 class we read the book Flatland. In my humanities class we read Slaughterhouse-Five.
In Flatland there is a world that is two dimensional and it explains to us what everything is like in a two dimensional place. This place is called Flatland. In Flatland females are lines and males are shapes. The less sides you have, the lower class you are in therefore, those who have many sides and are almost circles because of their abundance of sides are the leaders there. Our main character, A Square, was in his house one day when a sphere from the third dimension payed him a visit. This came as a huge shock to A Square because the Flatlanders did not know there was a dimension beyond their own. The sphere tried to explain the concept of height to A Square, but he didn't understand how up could be anything but the direction of North. When the sphere could not convince him of the third dimension and height he decided to take him out of their two dimensional world and into the third dimension or Spaceland. The square was amazed by it all because it wouldn't have been able to comprehend the idea of the third dimension if he were not taken there. This is because he had never experienced anything like it before.
Slaughterhouse-Five is also a book that takes us into the ideas of another dimension, however rather than a Flatlander understanding the concept of the third dimension it is about someone in the third dimension learning about he fourth. In this book the main character is Billy Pilgrim who becomes "unstuck in time". It is said that he is unstuck in time because instead of believing that time is linear as most humans believe he finds out a new perspective on time. Billy was once abducted by aliens called the Tralfamadorians. These aliens keep Billy captive for a while and teach him the truth about time. They say time is not linear, but somewhat like a mountain range. It is said that moments have always been and will always be as they are. This is because every moment has always existed. Moments do not actually come and go as humans believe, because of this the Tralfamadorians say that free will doesn't exist. Billy was in World War II and became a prisoner of war (POW) and we learned about his time as a POW. We also got to learn about Billy's life, his abduction, and his family all through his experiences time traveling after being abducted. He is able to time travel because since every moment exists he can go to different moments at different times.
Reading these two books helped us to expand our minds and think about things we not have thought about before and begin to understand some of the ideas about different dimensions. We also did a construction packet to help us understand how to draw and make art two dimensional and geometric. We also did some seminars and talked about the books in groups as well as annotating the books all so we could get a better understanding of the books, and be able to discuss the concepts within them. Doing all of this lead to the art project we did. For the project we picked a theme or idea from the books and then created a geometric representation of that idea in different creative ways.
​Final Art Piece:
​ 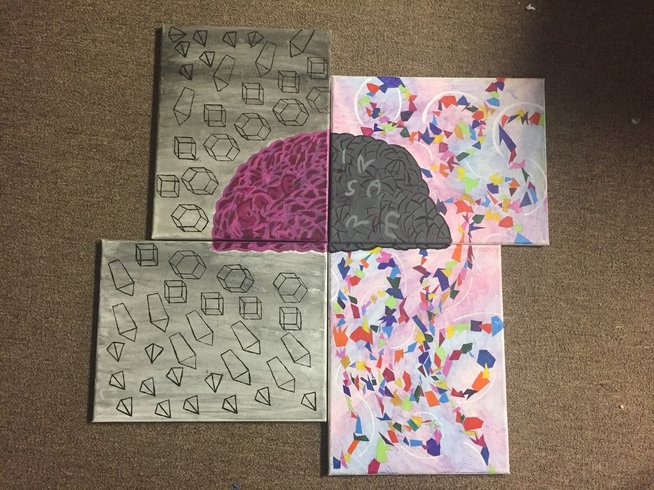 ​Video walkthrough of our final exhibition: