In this project we read and discussed the book "Fahrenheit 451", made an art piece in response to the book, and wrote either a historical/literary analysis or a fiction piece based off of the book.
We exhibited our art pieces on March 11th at the Powerhouse Science Center.

This art piece is a depiction of Guy Montag, the main character from Ray Bradbury’s novel “Fahrenheit 451”.

Montag lives in a futuristic society in which people have forgotten the beauty of the world.  Montag’s job is to destroy the last remaining books in this world, to prevent them from reminding people of older times when art and literature was celebrated and respected.  We wanted to create an image that would communicate the different metaphors of the book and how these metaphors are combined to construct the meaning of the character.

Montag is standing amidst a burning pile of books.  Two snakes crawl down his right leg, a metaphor for man controlling nature, which is a theme that occurs in the book.  Montag is represented as a man capable of controlling nature:  “With the brass nozzle in his fists, with this great python spitting its venomous kerosene upon the world…” (Bradbury, 1).  The snakes represent society’s desire to control nature, and the devastating results that follow from that attempt.

Montag’s left leg is a tree, which represents the character of Clarisse, a young girl who reminds Montag of the importance of nature.  His right arm continues the metaphor of nature through the depiction of vines and blossoms.  His left arm is a firehouse, and his stomach has gears inside of it, which represent the meeting of nature and technology in a human body.  A phoenix beats its wings inside his chest.  Phoenixes are mythological birds which move through a continual process of birth and death through fire.  Montag’s face has been intentionally left without features as the rain from the sky pours down on him, washing away his personal identity into a universal oneness with all things.

Montag is surrounded by the burned pages of books, which have been fashioned into birds to correspond with the metaphor used in the book to describe the books that Montag burns:  “The flapping pigeon-winged books died on the porch and lawn of the house...the books went up in sparkling whirls and blew away on a wind turned dark with burning” (Bradbury, 2)

Ultimately, this piece stands as a both a warning of the destructive power of humanity and technology, and also a hopeful symbol of the possibility of redemption and rebirth.  If only we keep the importance of knowledge and books alive, we have a chance of redeeming ourselves and our world. 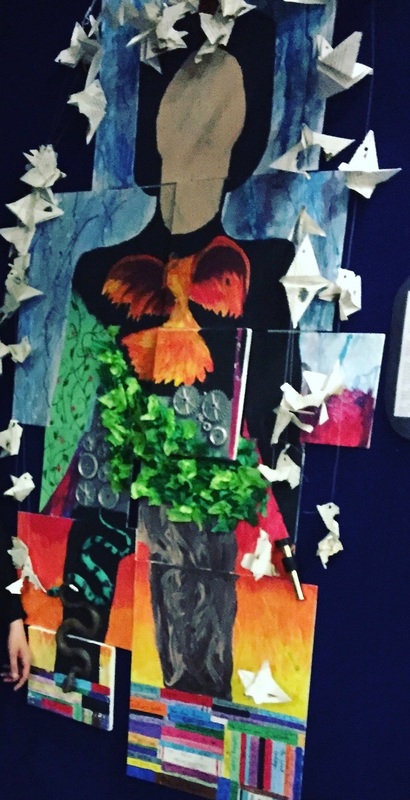 In this project we created a mask and essay about socialization. We made a mask out of plaster and painted it to match our socialization topic. My topic was about socialization around women. It was created to look like a doll's face and cracked to symbolize how people see girls as fragile. I then put metal underneath to show despite what some people think women are strong. I wrote my essay about this and about Malala Yousafzai's story.

Tennessee Williams was an American playwright and author of many stage classics.  He is considered among the three foremost playwrights in 20th century American drama. As Tennessee Williams said, “But these seemingly fragile people are the strong people really.”,  I believe socialization treats girls as if they are weak, fragile, and "can't handle themselves".  When in reality, many girls are very strong and make big differences.  One of these girls is Malala, an activist who grew up in Pakistan and lived through the Taliban control.  The Taliban believed that women should not go to school, but Malala disagreed and continued to go. Malala’s story has affected me because it makes me realise that when someone is trying to push you down and say you can’t do something just because of who you are, you can rise above them, use your voice, and be strong to continue to do what you want to.

The Taliban were the people who tried to hold Malala back from doing what she wanted to; go to school.  As an anonymous author writes in “The History of the Taliban”,  “The Taliban was one of the Mujahideen factions that formed during the Soviet occupation and the internal fighting in Afghanistan. The Taliban emerged as a powerful movement in late 1994 when Pakistan chose the Taliban to guard a  convoy trying to open a trade route from Pakistan to Central Asia. With Pakistan providing weapons, military training, and financial support, the Taliban gained control over several Afghan cities”.  They tried to hold Malala back from getting an education because she was a girl and, according to the Taliban, was supposed to be at home cleaning and taking care of the house.  According to RAWA (Revolutionary Association of the Women of Afghanistan), “Women have no importance in Taliban eyes unless they are occupied producing children, satisfying male sexual needs or attending to the drudgery of daily housework.”  It explains how the Taliban saw women and didn’t believe them to be important other than for those reasons.  Since they believed these things they thought it would be better for women not to go to school.  I also found that their “holy book”, the  Koran says "I shall not lose sight of the labor of any of you who labors in My way, be it man or woman; each of you is equal to the other (3:195)".  So from this we know they interpreted it wrongly and they didn’t follow all of their own rules.  So because they didn’t follow all their rules, they tried to stop all females in Swat Valley from going to school and succeeded with many people, but not all of them.  One of those people included Malala, who they could not hold back even though they tried.

Malala proved herself and what one person, one woman can do to change things and how strong women can be.  In one of Malala’s speeches she said, “terrorists thought that they would change my aims and stop my ambitions, but nothing changed in my life except this -- weakness, fear and hopelessness died, strength, power and courage was born."  We know the Taliban tried to stop Malala and her friends from going to school, but failed.  From biography.com, I found some information about her terrifying attack, “On October 9, 2012, on her way home from school, a man boarded the bus Malala was riding in and demanded to know which girl was Malala. When her friends looked toward Malala, her location was given away. The gunman fired at her,   hitting Malala in the left side of her head; the bullet then traveled down her neck. Two other girls were also injured in the attack.”
Malala healed after this and continued to get an education and to use her voice for hers and others rights.  This shows Malala had strength and courage through out everything that happened to her.  She showed us what she can do as one person.

When girls are considered weak it can change their life sometimes.  When Malala was being held back from what she wanted to do it completely changed her life.  Amna Nawaz and Reuters wrote, “She was targeted just because of her determination to go to school.”  “The extremists showed what they fear most – a girl with a book.”  It shows how Malala’s life was changed when she decided to go to school even though she was not supposed to.  Since she was so determined she ended up being shot one day on the bus just because she continued her education and encouraged others to do the same.  After recovering and still wanting to get an education and help others after everything she later became an activist for females’ education.

As I explained, socialization treats girls as if they are weak, fragile, and can’t do the things they want to because they are “just girls”.  As we saw the Taliban treated women this way and tried to keep women from getting an education, but Malala wouldn’t take this, she overpowered and went to school anyways.  She also used her voice to help others get the inspiration and courage that she had.  By doing this Malala’s life changed extremely, she is now able to get an education and continues to help others get theirs.